The Vermont Attorney General’s office chooses which public records requests it will honor after Googling requesters’ political leanings, an attorney admitted during oral arguments in a recent transparency case. 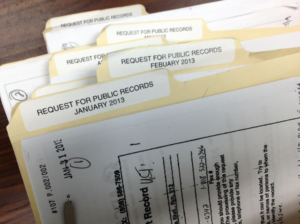 According to the complaint, E&E Legal Institute requested the communications of the coalition of 17 attorneys general led by New York Attorney General Eric Schneiderman and Vermont Attorney General William Sorrell. The institute never received the records and has ongoing legal proceedings in Washington County Superior Court.

“We get a request from EELI and so one thing we might consider is where are they — who are these people? Where are they going with this? And we Google them and we find, you know, coal or Exxon or whatever — and so we’re thinking this is — we better — we better give this some thought before we — before we share information with this entity,” Griffin said.

“Or it might be a news organization and we think, well, what are they going to do with it? Well, they’re going to publish it to the world. So that would be — I mean, that would be my mental impression and, you know, let’s exercise some caution. Is there some public interest in publishing this information at this time? Probably not.”

Matthew Hardin, the attorney for the plaintiff, appeared stunned by the admission.

“The broadness of the argument that the Attorney General is making, basically, that, under 1.6, everything is confidential, except for things that they selectively choose to disclose. Everything is exempt except what they choose to disclose, and now they say, because they’ve taken into consideration the best interests of the State of Vermont,” Hardin argued in response.

“And it’s now come out in oral argument that one of the things that they do to determine who’s entitled or who they will provide public records to is they do a Google search. And it turns out that, when you Google my clients, you might find out things like coal or Exxon,” he said. “So my clients don’t have rights under the Public Records Act because a Google search conducted by Attorney General’s employees says that they’re bad people, basically, and I just don’t think that’s what the law is. I believe that the law is neutral. I believe that it applies to all of the citizenry.”

AGs United for Clean Power has since largely disbanded, in part due to embarrassing public record releases. The group formed in March 2016 to coordinate investigations into whether fossil fuel companies misled investors and the public about climate change. Critics accuse the AG coalition of trying to stifle free speech.

“This is sort of a case about a case,” Hardin said. “The state of Vermont signed a contract with a whole bunch of other states, including New York, and what that said was they were going to share documents with each other and they weren’t going to supply these documents in response to public records requests.”

He added that Vermont public records law doesn’t allow selective handling of public records requests, and even if it did, E&E Legal Institute would challenge it as a violation of the Equal Protection Clause of the 14th Amendment.

“The legislature has made clear that it’s in the public interest of the state of Vermont … to provide records even though those records might be embarrassing,” he said. “And I think the attorney general is conflating and getting a little bit confused what are his personal interest versus what is the best interest for the state of Vermont.”