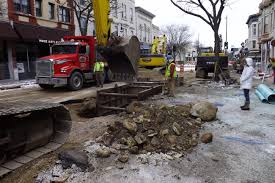 One of the bill’s sponsors, Rep. Rob Hutton, R-Brookfield, said Thursday was a “win for all taxpayers.”

“This common sense legislation will open up the process to allow more quality contractors to bid on government construction projects,” the lawmaker said in a press release. “When competition increases, quality goes up, costs go down, and taxpayers win.”

Unions and their allies in the Democratic Party insist the bill is a loser for workers and communities.

“Today, (Republicans) passed this bill to make it easier for less qualified, out-of-state workers to undercut workers in our own state on projects funded by taxpayer dollars,” the Kenosha Democrat said in a statement following passage.

The bill’s proponents say Democrats and unions, again, are engaging in scare tactics to save the government-controlled good thing they’ve had, at taxpayers’ expense, for decades.

Hutton said the legislation merely demands that the government is a neutral player in the process.

PLAs are agreements between owners of construction firms and construction unions. Under current state law, firms bidding to work on a public construction project can be required by municipalities and school districts to enter into collective bargaining with the unions, hire workers through union hiring halls, and pay union wages and benefits. This applies to contractors whether they normally use a unionized workforce or not.

The reform bill would change that.

“We’re basically eliminating the ability for a municipality to require that a contractor enter into a project labor agreement for collective bargaining around labor and labor wages,” Hutton said in a previous interview.

“This is really a government neutrality bill. It says the government should not be in the position of dictating what class of workers are able to get public-funded construction projects,” Hutton told Wisconsin Watchdog Thursday following passage of the bill.

Mandating that only contractors with union employees bid on government construction jobs often locks out nonunion firms that don’t want to take on the additional cost – often substantially higher cost – of employing unionized workers for a job while their crews may have to stand idle.

While conservatives celebrated another win for taxpayers, business, and the free market, liberals lamented the latest in a long line of Republican-led laws drastically diminishing Wisconsin’s powerful organized labor machine.

“From Right-to-Work to repealing prevailing wage, the PLA bill is just another in a long line of GOP policies that adversely affect Wisconsin workers and Wisconsin businesses from the GOP,” Barca said.

The Republican-controlled Senate passed the bill last month on a similar party-line vote.

“From the passage of Right to Work to the repeal of the prevailing wage for local governments, we have taken great strides in encouraging open markets and removing government policies that artificially drive up costs,” Senate Majority Leader Scott Fitzgerald, R-Juneau, said last month.

Walker, who shocked the union world six years ago, with his Act 10 public sector collective bargaining reforms, is expected to sign the PLA reform bill.