MADISON, Wis. – Kris Ottman’s job came with the kind of stress that few ever experience.

He lived a ticking time bomb existence – literally – in a place that gave hell a run for its money.

Ottman joined the Army in 2004 as an explosive ordinance deployment specialist – part of the Army’s bomb squad. He worked as an ammunition specialist during two tours of duty in the Iraq War. 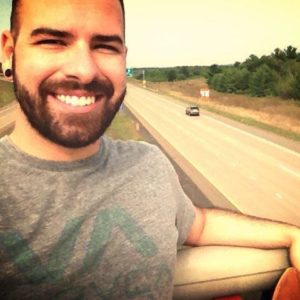 The 31-year-old Wausau resident saw more than he wants to say: mortar attacks, the strain of cleaning out rigged Humvees following improvised explosive device explosions. He pulled out bombs and he dragged out bodies. When he wasn’t dealing with explosives he and his fellow soldiers were taking enemy fire in unarmed vehicles.

But the war wasn’t over for Ottman when he left Iraq in 2009. His fight for the care his country promised him in exchange for those stressful days of service was just beginning.

During his first tour in 2005-06, the specialist developed problems with his digestive system. In short, his esophagus stopped working. He said he dropped 30 pounds during deployment.

“Imagine the worst heartburn, but 10 times worse,” he said. Ottman couldn’t keep water down, let alone food.  No one could figure out what was causing it.

He eventually came back to the United States to have laparoscopic surgery. Doctors wrapped a portion of his stomach lining around the bottom of the esophagus to support the sphincter muscle. The idea is to prevent corrosive stomach acid from invading the esophagus.

It worked. For a while.

But within 18 months, Ottman said, his esophagus got so tight he was having trouble swallowing. The pain is debilitating, he said.

“I end up dry heaving and the suture eventually starts to wear down. Then I start coughing up blood,” the veteran said.

The remedy has been an elongated balloon to stretch out the esophagus. The procedures uses a scope to determine whether there has been any tearing. Usually there is evidence of erosion.

Ottman said he has had the dilation done three times. He was under the impression that the surgery was not covered by the Army when he left active service in 2010.

The U.S. Department Veterans Affairs acknowledged Ottman’s esophageal problems were service-related. Yet, the agency gave Ottman a zero on the VA disability rating chart, which means the VA isn’t going to provide compensation for the disability that Ottman asserts is clearly the result of his war service. The ruling was contrary to a private health care provider’s finding.

Ottman previously had been diagnosed with post-traumatic stress disorder, and the VA rated his PTSD as a service-related injury, at 30 percent on its disability chart. The veteran is entitled to monthly compensation.

The stress, he said, was what destroyed his esophagus, during and after the war. Ottman said he had never experienced anything like it before he was sent to Iraq, and there was no family history of the disorder.

“The reason why my digestive system started to fail was due to the stress and diet changes of being deployed and the things I was dealing with overseas. That’s how my body chose to deal with it,” he said. “It was related to my deployment, like my PTSD is. The fact the VA sees it as zero percent, well, it’s ‘Sorry, sucks to be you.’ That’s how I perceive their view of it. And it’s partly because they don’t want to pay out. They don’t want to admit fault.”

Ottman said he stands to receive approximately $40,000 in back pay under a 30 percent disability rating schedule.

According to the VA, “Compensation may also be paid for post-service disabilities that are considered related or secondary to disabilities occurring in service and for disabilities presumed to be related to circumstances of military service, even though they may arise after service. Generally, the degrees of disability specified are also designed to compensate for considerable loss of working time from exacerbations or illnesses.”

Last year, Ottman said things got so bad he wasn’t able to eat. He was losing weight again. A service representative in Portage County advised him to file for an appeal because it “seems odd that they gave you a zero-percent rating.”

He met with a private provider. Ottman was told what he already felt: His esophageal wrap was too tight again. He went through another round of dilation again, and once more he instantly felt better. It was a mixed blessing.

Ottman said an examining physician at the Tomah VA Medical Center perfunctorily looked at his file notes and determined he was fine, which made sense: He had just had the procedure that temporarily improved his condition. The physician, Ottman said, did not take into account his medical history.

“At that point, it wasn’t bothering me. In 18 months it will be,” the veteran said.

Worse still, according to Ottman, he was never informed that he was denied disability compensation for his chronic esophageal issues. No letter. No phone call. No email. No text. But his online files note that a notification letter was sent. Ottman said he never received it. Strange, he said. He’d never missed a VA letter before.

He found out too late that he had 60 days to appeal the ruling.

“From my understanding, the only route left to me is to go back in and rebuild the case from scratch with new evidence,” Ottman said. “It’s a very frustrating process. It seems like there is so little communication and follow through on their side.  I have the proper paperwork showing moderate esophageal stricture. You look at the rating guide, it’s the same rating.”

Tomah VA spokesman Matthew Gowan said he could not speak to Ottman’s case unless he received permission from the patient. Ottman said he granted disclosure permission on Friday. Gowan on Wednesday claimed that he hadn’t received the proper signature from Ottman to “ensure that I’m protecting the veteran’s rights under HIPPA and Privacy Act every single step of the way.” Ottman said he digitally signed the form, including his Social Security number, but Gowan insisted on a “wet signature.”

Ottman said Gowan’s office instructed someone from the psychiatric department at Tomah to call him “because from the information he was given I was having an issue that needed to be addressed.” Ottman said he explained that the matter was about his disability claim and appeal and the staff member said that he was told Ottman was having “concerns with a mental health issue.”

Beyond the battles over disability compensation, Ottman said he has been subjected to what so many of his veteran brethren have endured: long delays.

In one scheduling tilt-a-whirl, Ottman said he was told he would have to wait weeks just to schedule an appointment with a VA psychiatrist for the first available opening – three months later.

Despite the media coverage, public pressure and assurances from the VA that wait times are improving, Ottman said, from his experience and other veterans he knows, they are not. From initial examination to test to procedure, he said, it can take a year to move through the VA health care system.

Kevin Nicholson, a decorated veteran of the wars in Afghanistan and Iraq, says the song remains the same for the bloated government bureaucracy that is the VA health care system.

Nicholson, a member of the Wisconsin Board of Veterans Affairs, worked alongside the EOD and ammunition teams under his command. He said the life-and-death pressure the bomb squad teams deal with is unimaginable to the average person. What veterans must go through to receive disability benefits is a stress that only a “gargantuan” government agency could create, he added.

“It can take several months, if not years, for them to hand down their decision,” Nicholson said, noting that a veteran needs an advocate with knowledge of the system’s intricacies in order to expedite the process. “What’s nonsensical is that’s expected. You need an outside advocate to advocate for you.”

​The average wait time to evaluate a claim was 277 days in 2012, according to a Center for Investigative Reporting investigation. The VA has reported “slow but measurable progress” in reducing the backlog.

Nicholson, a Milwaukee-area conservative considering a run for U.S. Sen. Tammy Baldwin’s Senate seat in next year’s election, said there is “no fixing” a VA system that is “so broken from top to bottom.”

“The thing needs to be dismantled, starting from the ground up,” he said. “More than any other federal agency that exists, this one has so many consistent and life-altering mistakes.”

The Tomah VA Medical Center has been trying to heal since early 2015, when it was first reported that the health care complex had been dubbed “Candyland” because of the opioid overprescription practices of its disgraced former chief of staff. A U.S. Senate committee report last year found the medical facility was sickened by a “culture of fear” that lead to the death of at least one veteran and retaliation against the whistleblowers who first raised red flags.

Ottman said he sees a disconnect with old promises and political priorities.

“You see all this legislation coming down about refugee cities trying to help all of these people who are not even citizens of our country, the people we fought against in some instances,” the war veteran said. “Our nation wants to take care of these people, but not us.”

He hopes his story will help shine some light on the myriad problems in the VA system.

“Even though my situation may not be the most severe, hopefully if people are going through what I have dealt with or worse, this gives them hope that there are other roads they can take,” Ottman said.