​MADISON, Wis. – Wednesday marked the one-year anniversary of the day an army of Democratic prosecutors unveiled a coordinated campaign to hunt down so-called “climate change deniers.” Constitutional experts have described the initiative as one of the more egregious attacks on the First Amendment in U.S. history. 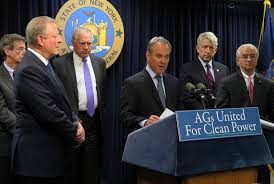 The Competitive Enterprise Institute, caught in the crosshairs of the climate change coalition of the willing, marked the anniversary with a combination of celebration and vigilance.

“While pretending that this was a law enforcement investigation, Schneiderman made clear that he was pushing a policy agenda—‘to defend the climate change progress made under President Obama and to push the next president for even more aggressive action,’” said CEI General Counsel Sam Kazman in a statement.

“Since then, Schneiderman’s coalition has fallen apart: most of its members have left, the subpoenas served on us and Exxon by Virgin Islands AG Claude Walker were quickly withdrawn, and the climate science debate that this gang tried to shut down is more energetic than ever,” Kazman added.  “Ironically, nowhere is that better demonstrated than by (Tuesday’s) environmental Executive Order from the president.”

Trump was surrounded by coal miners Tuesday as he signed the executive order. The president has said boosting U.S. fossil fuel production in pursuit of energy independence is a priority for his administration.

“My action today is the latest in a series of steps to create American jobs and to grow American wealth. We’re ending the theft of American prosperity and rebuilding our beloved country,” he said before signing the order at an EPA that clearly is moving in a different direction from the aggressive enforcement agency of the past eight years.

Not surprisingly, the climate change faithful are furious. Obama EPA Administrator Gina McCarthy sees all of her regulatory work going up in smoke.

“This is not just dangerous; it’s embarrassing to us and our businesses on a global scale to be dismissing opportunities for new technologies, economic growth, and US leadership,” she said in a statement.

Nathan Richardson of the environmental extremist group Resources for the Future likened the executive order to the short list of America’s “truly shameful” days. Among them, “the Dred Scott decision, the Trail of Tears, Japanese internment, and Abu Ghraib —most of them symbolic of a larger national moral failure.”

As CEI pointed out, Richardson’s opinion was quickly endorsed by Vox explainers and a New York Times reporter.

Those entities need not fear the threat of a sweeping, state-sponsored investigation into what they said and who they associate with. But CEI and other research organizations that have challenged the flawed science of the climate change crowd have had such a probe hanging over them for months.

Former Vice President Al Gore was on hand March 29, 2016, when Schneiderman and 16 other Democratic AGs moved to take up their investigative campaign against ExxonMobil and other alleged violators of “climate fraud.”

In June, Walker withdrew his subpoenas of ExxonMobil and CEI. The attorney general claimed he was looking into whether ExxonMobil had concealed its “understanding of climate change” from customers and investors.

“He served an astonishingly overbroad subpoena on a public policy organization, demanding that it reveal its internal communications and communications with allies,” CEI’s court motion stated. “He conceded, in his briefing, that his subpoena was unsupported by the statutory authority that he cited as justifying it. And he has undertaken a series of legal maneuvers to evade judicial scrutiny of his actions, even while continuing to threaten CEI.”

The legal battles go on.

In a similar legal battle, Massachusetts Attorney General Maura Healey, part of the so-called “Green 20,” sought 40 years of ExxonMobil’s documents in a subpoena. The company’s attorneys in September argued in a Texas court that if Healey’s overly broad subpoena was allowed to stand, “nothing is to stop a state prosecutor from issuing a subpoena to a political opponent seeking decades of records on the theory that a disagreement about policy constitutes fraud.”

In November, a New York Supreme Court justice ordered Schneiderman to release common interest agreements with other state AGs that CEI had sought in an open records request.

“CEI’s court victory is a blow to the anti-free speech campaign led by New York Attorney General Eric Schneiderman,” CEI’s Kazman said in a statement. “While the campaign by him and his cohorts that began in March (2016) continues against those who disagree with him on global warming, we are glad to see that it is being held subject to the basic laws of the land.”

Grossman noted the similarities of the politically motivated investigations.

“In both instances you have law enforcement officials using the powers of their office to target people on the basis of their opinions,” the attorney said, adding that liberals increasingly have abdicated their position as defenders of free speech.

Grossman said the failure of the climate change prosecutors’ coalition should be the end of the story, but CEI isn’t taking anything for granted.

“CEI is going to continue to make arguments for First Amendment rights. Not just for themselves; they want to make sure everyone has that opportunity, even those with whom they disagree.”