Last week, Gov. Phil Scott announced that his administration is preparing to move away from Vermont Health Connect, the state’s insurance marketplace that has cost taxpayers over $200 million.

“We’re looking to bring a proposal forward before the next legislative session … [and hope to move] away from VHC by next January,” the governor told reporters at his weekly press conference. 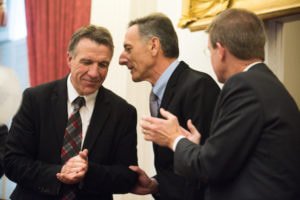 While the governor has not released detailed information about the changes, he claims the proposal will be an innovative plan “others throughout the country could take a look at and follow.”

The marketplace has likely cost more than $200 million, though the exact figure is not certain due to the state’s failure to report expenses, a violation of federal law. Despite the continued investment in the health exchange, workers still have to process changes of information by hand, and customers remain frustrated.

Scott said his decision was based on the health care reform slowdown from lawmakers in Washington as well as recent security breeches, including the disclosure of social security numbers online through the online system. “ This is a new world for us. [Data breeches aren’t] going to subside. This is going to intensify,” Scott said.

​But health care experts tell Watchdog that Scott has few good options, including his idea of merging marketplaces with states like Connecticut to stabilize the system and share costs.

Robert Graboyes, a senior research fellow at the Mercatus Center at George Mason University, says the logistics that caused the plan to fail apply to other health care proposals thrown out by Republicans.

Graboyes said the state also would have to mediate legal battles constantly, such as how to make rates and insurer regulations the same for each state. Even consumer complains, he added, would become more complex to manage.

“The logistical conundrums this idea presents underlines one big reason I am deeply skeptical of conservatives’ favorite reform idea — buying and selling health insurance across state lines,” he said.

“My guess is the state’s real option is to follow the example of Oregon: close the state exchange and accept the federal healthcare.gov website as the state’s exchange. There are costs involved, but there are no costless options.”

In December, a state-commissioned independent review of VHC advised against joining the federal exchange due to costs and lack of ease. However, those findings may lack objectivity since the group conducing the study, Strategic Solutions, is often hired to fix state exchanges.

When Nevada transitioned to the federal exchange in 2014, lawmakers estimated the change would cost about $20 million. That is roughly half the cost of annual VHC operational costs. However, the transition would likely cost more due to penalties written into the Affordable Care Act relating to states pulling out of state exchanges.

Additional problems keeping Vermont from the federal exchange are that health policies have less flexibility and are extremely dependent on federal funding.

Michael Cannon, director of health care policy at the Cato Institute, says that it is not possible for states to opt out of both a state and federal exchange.

“There really is nothing that states can do to fix Obamacare’s problems,” he told Watchdog. “All Obamacare provisions apply in all states, regardless of what the state does.”